Researchers recently examined the initial public offering (IPO) -- a private firm's first sale of stock shares to the public -- of firms listed on Kenya's Nairobi Stock Exchange (NSE) between 1994 and 2008. During this time, the number of IPOs listed per year varied from zero to four. The researchers wanted to examine the extent to which four different variables -- investor sentiment, firm size, board prestige, and firm age -- affected the IPO stock share price, which is set by the firm. They hypothesized that all four variables would show a strong positive correlation with this IPO asking price. However, after examing the firms listed, they were surprised to find that none of the variables showed a strong positive correlation with IPO pricing, and in fact investor sentiment and board prestige both showed a strong negative correlation.

The researcheres also discovered that nearly all of these IPOs were underpriced by an average of 50 percent, which is to say the IPO share prices were about half of what the share prices were at the close of the first day of trading. Such underpricing constitutes a loss to the listed firm because the firm could have immediately raised more money with a higher price. The researchers noted that firms should take care to set an IPO price low enough to capture investor interest but high enough to generate sufficient capital for the firm.

The table lists companies examined by the researchers, that had their IPO on the NSE between 1994 and 2008, together with the IPO share price, first day closing price, and percent underpricing. Prices are in Kenyan shillings. 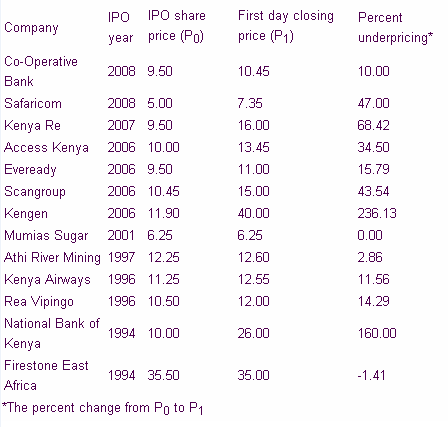 For each of the following statements, select Inferable if the statement is reasonably inferable from the Information provided about the NSE IPOs. Otherwise select Not inferable.